Under a Scottish Skye

As a schoolgirl playing in the orchestra, I always remembered the soaring melodies of Mendelssohn’s famous Hebrides Overture (or “Fingal’s Cave”) and after an exhausting month working and sampling Edinburgh’s Festival season, I decided to reward myself with a visit to the Isle of Skye, one of the islands in the Hebridean chain that inspired the music.

While there are buses that will whisk you from Edinburgh through the centre of Scotland to Kyle of Lochalsh, the launching point for expeditions to the Isle of Skye, I wanted to take my time and explore the countryside en route. So, at the wheel of a rental car, I left Edinburgh behind as I followed the Firth of Forth along the M9 as the sun slowly emerged above the horizon. In the soft light of early morning, the emerald green landscapes were layered in a fine mist and I felt the surge of freedom that comes with being on the open road with unexplored territory ahead.

The long road to Skye 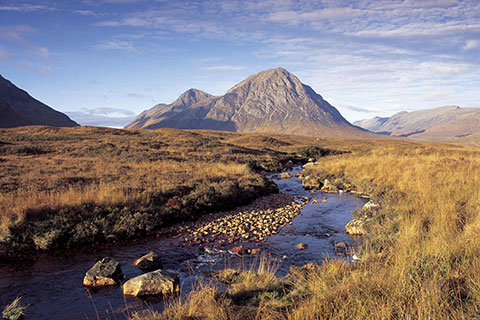 My first stop was the town of Stirling, the former capital of Scotland, which is set around its hilltop medieval fortress. I wandered the cobblestone streets that lead to the impressive 12th century castle and enjoyed the commanding views over the town and sprawling countryside below. The history of crusaders and conquerors associated with its stunning architecture was palpable and as I stared up at the statue of Robert the Bruce, King of Scots, I wished my time constraints allowed me to stay a few days here to really delve into Stirling’s historic legacy.

From Stirling I continued northwest through the wild expanses of the Trossachs National Park and into the heart of spectacular Glencoe. Of all the Scottish glens, this is perhaps the most famous, and as I drove through its towering, jagged mountains I could understand why. On the outskirts of the town of Glencoe, I parked the car and followed a trail along the foot of the mountain that reached the forested shoreline of Loch Leven. Standing here, backed by the dramatic highland peaks I again wished this short expedition to Skye allowed me the time to saunter into the remotest reaches of Glencoe along its numerous hiking trails. For outdoor enthusiasts, the opportunities here are endless, and provided you are equipped for the wild changes in weather for which the region is known, getting lost in Glencoe would be heaven for some! 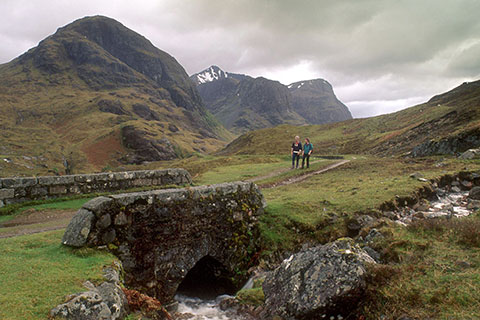 Back in town I grabbed a sandwich and drove northeast along the shores of Loch Leven, through Fort William and parallel to Loch Lochy, before the road swung west towards Kyle of Lochalsh. Just before reaching this town where the Skye Bridge stretches from the Scottish mainland over to the second largest of its offshore islands, I passed one of the country’s most iconic and photographed landmarks: the Eilean Donan Castle. Dating to the 13th century and a former stronghold of the Mackenzie Clan, it is set on a small tidal island and appeared otherworldly, ignited by the late-afternoon sun.

Daylight lingers well into the evening hours during the long Scottish summer days, and there was still plenty of light as I crossed the Skye Bridge and arrived in Portree, the capital of the Isle of Skye. Portree oozes charm, with its colourful harbor residences sprawling along the water’s edge. I settled into a seafood restaurant set within this historic conservation area where I feasted on Skye mussels cooked in white wine and cream and sat nursing a glass of red wine until fatigue finally drove me to the guesthouse where I had book a room.

Heading north into the Trotternish 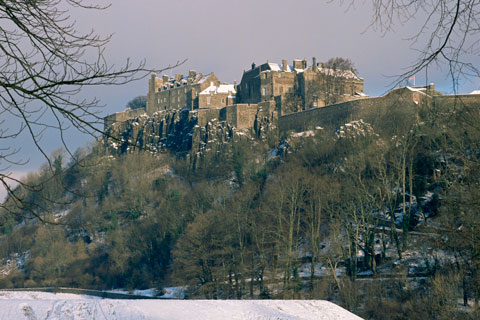 It was a late start the following morning as I let my body wake at its leisure and took my time over breakfast at the guesthouse. My plan was to drive north from Portree and do a loop through the town of Uig back to my starting point, taking time to explore some of the walking trails and landmarks on the way.

My first destination was The Old Man of Storr, a towering rock pinnacle that is a classic example of the Trotternish landscape of the northern part of Skye. It was a 45 minute steep walk up to the base of the “Old Man” where I found sweeping views across the Isle of Raasay to the Scottish mainland and south towards Portree. The trail was busy with other hikers and tour groups, keen to take in one of the island’s most famous views while the weather was putting on such a glorious display of intense blue skies and cotton-wool clouds.

Continuing north I reached the carpark for the Lealt Falls, a picturesque cascade with a large pool at the bottom where the brave can swim in its icy cold waters. From here a walking trail follows the River Lealt to the picturesque Loch Cuithir and a disused section of the old diatomite railway that used to haul chalk from the loch to the coast for it to be dried and ground. I debated whether to follow the trail further inland, but decided to push on to Kilt Rock, a 90-metre-high cliff face resembling this most-traditional of Scottish attire. From the viewpoint there were not only impressive views along the Trotternish Peninsula to the Isle of Lewis, but also the Mealt Falls which tumble over the cliff edge to the rocky shores below. 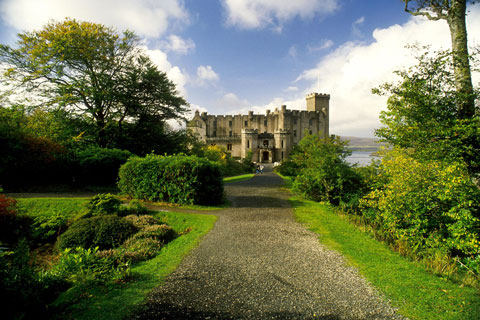 From Kilt Rock the road continues through the tiny settlement of Staffin from where you can head directly west to the town of Uig or venture to the northernmost point of Skye where the ruins of the Duntulm Castle hold a striking position. Once the seat of the MacDonald of Sleat Clan, legend tells of a chieftain’s son falling to his death from one of the castle windows and his nursemaid, punished for her dereliction of duty by being outcast on a small boat into the wild North Atlantic waters.

I stopped in the town of Uig for a steaming bowl of soup, finished off with homemade carrot cake, then continued south to a hidden gem that friends had recommended: the fantastical Fairy Glen. This magical landscape of incredible landforms is believed to have been created by a group of elusive fairies and despite a lifetime dedicated to both ration and reason, I learned that an excited imagination can overtake a girl no matter what her age. I hiked over the rolling hillocks and up to the peak of Castle Ewen which boasts beautiful panoramas across the glen, then sat, waiting for the fairies to appear. When they didn’t, my ration and reason decided that perhaps they were away on their annual summer vacation.

Returning to Portree with plenty of daylight hours left, I wandered its streets and poked my head into galleries featuring artistic views of the overwhelming beauty of the island, and boutiques featuring the handicrafts produced by artisans from across Skye. If you need proof that wild, stunning landscapes inspire creativity, then the shops of Portree are a good port of call.

On the whiskey trail 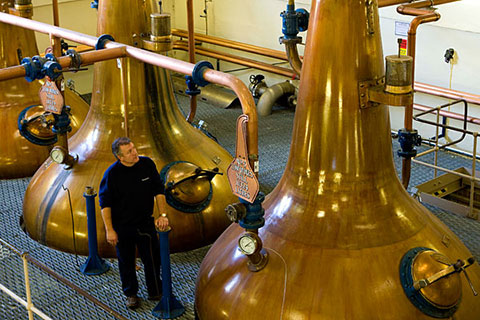 I fell asleep before the summer sun had set and woke with it poking through my window, totally unaware that had night descended at all. The plan for my second day on Skye was to head west to Dunvegan Castle then south for a tipple at the famed Talisker’s Distillery, the oldest working whiskey distillery on the island. What happened in between I left to fate.

Dunvegan Castle stands on a windswept, rocky promontory at the edge of Loch Dunvegan and holds the status of being the oldest continuously inhabited castle in Scotland, serving as the seat of the Chiefs of the MacLeod Clan for the last 800 years. Today its breathtaking gardens and lavish interior are open to visitors and offer a captivating glimpse into Scotland’s storied clan history. Wandering through its rooms, I witnessed some of the clan’s most prized treasures, including the “Fairy Flag”, considered to have insurmountable power when raised during battles. I wondered if the “Fairy Flag” had the ability to summon the fairies that had eluded me yesterday. 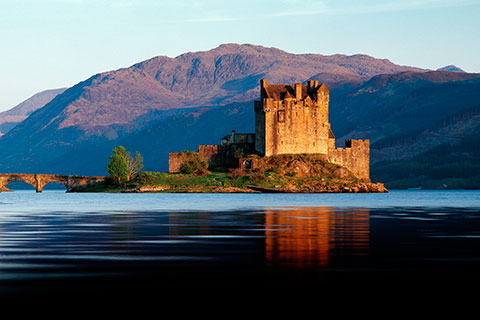 One of the staff at Dunvegan pointed me in the direction of a short beach walk, a ten-minute drive to the north. Traversing farmland inhabited by newly-shorn sheep, the trail led to an expansive beach entirely covered in small, hard coral. As the only soul on this pristine sweep of coast, I was tempted to strip off and dive in, but after dipping my toes in the surf, I instantly remembered that the North Atlantic is not the Caribbean.

Back in the car, I drove back through Dunvegan, and headed west to another landmark: Neist Point and its historic lighthouse. It marks the most westerly point of Skye and is situated on a dramatic promontory with cliff faces that drop sharply into the waters below. The lighthouse, which dates to the early 1900’s, is reached along a spectacular walking trail with incredible vistas across the surrounding cliffs. It culminates in a field of stone towers, built by visitors just like myself, in front of the old lighthouse. I had been told that this was a good place to spot whales migrating along the coastline, but, like the fairies of the day before, the whales stayed out of sight.

The road south hugged the coast as the rugged mountains of Skye provided endless inspiration around every corner. While the warm mid-summer weather was inviting and the sun illuminated the earth, I felt that even in the cold depths of winter under a drizzly, grey sky, this island would still be overwhelmingly beautiful. As the road stretched ahead to the Cuillin ranges and the highest peak on Skye, Sgùrr Alasdair, I veered to the right where the famed Talisker Distillery stood on the shores of Loch Harport. 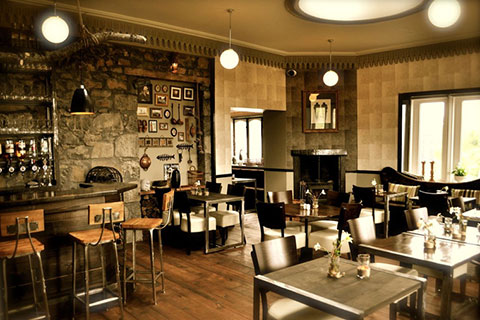 While I’m not a keen spirit drinker, I can be convinced to partake in the occasional whiskey and it seemed sacrilegious visit Scotland and not sample some of its finest. At Talisker one can tour behind the scenes and get a lively peek into what goes into making their renowned single-malt scotch whiskey, then sit down to taste any or all of their five different varieties. Considering I was behind the wheel, I settled on just one wee dram, but was convinced sufficiently to take a bottle with me for further study at a later date.

Back in Portree that evening, I dined at a restaurant I had been told sourced most of its ingredients from the island itself. I started with locally grown oysters, followed by pan-fried halibut fished from Portree’s waters, and was going to forego dessert until I spotted chocolate mousse on the menu, infused with an added kick of the Talisker whiskey I had been sampling earlier in the day. Feasting on such vibrant cuisine that had been lovingly cultivated and created in this wild paradise was a rare treat.

The following morning as I packed my things and prepared to leave, I had a fierce urge to ditch the big city living and settle on a small plot on the edge of one of Skye’s tiny whitewashed towns. I hoped at some point in my future life I would wake each day to expansive vistas across never-ending moors, and fall asleep by a crackling fireplace, listening to the roar of the wind and with a Talisker’s nightcap by my side.