What is today’s interesting and amusing oddity is likely to become the way of the future in hotels. 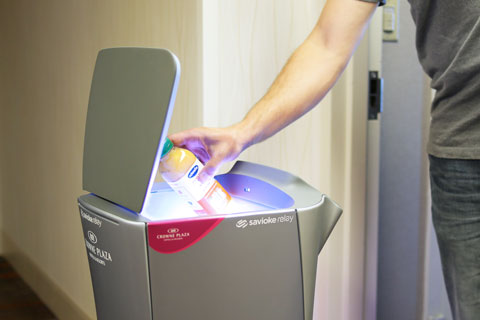 A handful of properties in California–Los Angeles and the Silicon Valley area–have added a new robot room service amenity for guests who forgot to pack their toothpaste, a phone charger, or just want to see what the future will be like.

The robots–named “Dash,” “Wally” and “Relay,” depending on the hotel–are programed to deliver small items to a guest’s hotel room. Using GPS and 3D cameras, the three-foot tall robots will arrive at the guest’s room, automatically dial the room to announce their arrival, and, with a touch-screen message, ask if they can fetch anything else.

The units in California are made by Savioke, based in Santa Clara, Calif., the heart of Silicon Valley. Hotels using the new service include the Residence Inn by Marriott on Century Boulevard in Los Angeles, the Crowne Plaza San Jose-Silicon Valley in Milpitas, the Grand Hotel in Sunnyvale, the Aloft Silicon Valley in Newark, the Aloft Cupertino in Cupertino and the Holiday Inn Express in Redwood City. 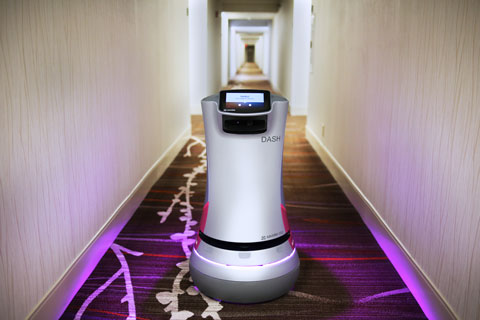 Guests have reportedly been positive about the new robotic room service. Some hotel managers have reported guests ordering room deliveries just so they could snap a selfie and post to the social media.

In fact, the robotic units have been programmed to ask the guest to post a review on Twitter in lieu of a tip, which is not required.

The only problem reported in the first few months of use: a guest who dumped wet towels in the robot’s carrier, which shorted out the unit.

It likely won’t be long before these little R2-D2 units are found whirring up and down the hallways of most of America’s hotels.