While many visitors are attracted to South Africa for its thrilling wildlife encounters, gastronomic wine touring experiences or its captivating recent history, my first visit was driven by, of all things, football.

It was 2010, the World Cup of soccer was being played throughout South Africa and my national team from Australia had (somehow) qualified! That seemed like ample excuse to make my first expedition to the African continent.

It wasn’t until a number of years later that I again flew into Cape Town, this time from Addis Ababa where I had spent a month bearing witness to the evocative landscapes and tribal people of Ethiopia. This time, arriving in South Africa was like stepping into a completely different world — one where supermarkets stocked feta cheese and people walked down the street glued to their iPhones. After countless nights in campgrounds, I was treated to the luxurious comfort of a thick mattress and plump cover, while Cape Town’s dining options were overwhelming after weeks of Ethiopian injera (a spongy sourdough flatbread) and ful (fava beans with olive oil and garlic).

Cape Town is a city that is easy to fall in love with. It stands alongside Rio de Janeiro and Sydney as one of the world’s most beautiful cities, backed by the iconic Table Mountain, so often shrouded in its soft “tablecloth” of cloud. 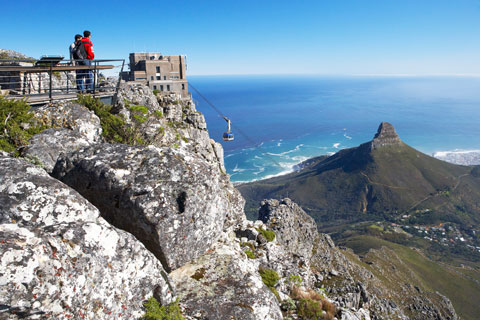 One of my first expeditions was to hike the steep, rocky slope that runs parallel to Table Mountain’s cable car to take in the panorama that stretches across the city to the Atlantic Ocean and south towards Cape Point. My partner and I wandered along the beautiful nature trails that crisscross the flattened peak, through protected areas of hardy vegetation that persevere despite the mountain’s penetrating winds.

From the top of Table Mountain you can see across to Robben Island, the notorious offshore prison where Nelson Mandela, the father of modern-day South Africa, was held for 18 years. A visit to that place to tour its dank cells is the best way for visitors to get a glimpse into the racial tensions that have rocked South Africa throughout its history. While Mandela’s story has inspired millions around the world, one learns that there were many other smaller struggles and lesser known events that played a role.

We spent an afternoon at the District 6 Museum — a small community operation that details the government decision in the 1960’s to transform the cosmopolitan neighborhood of Cape Town, known as District 6, an area settled by freed slaves, artists and immigrants in the late 19th century, into a “white-only” area. 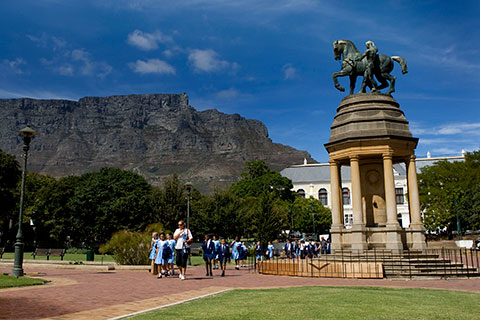 More than 60,000 residents of the district were forcibly shipped to the outlying Cape Flats and their houses levelled. Reading the resistance poetry that adorned the walls of the museum and seeing the images of those whose lives were upturned was an emotionally charged experience, but also a vivid celebration of their legacy and the role they have played in shaping Cape Town today. We intended to only spend an hour here, but it turned into two as we lingered at a small cafe and chatted with its owners, women who had grown up in District 6, been removed, and who now served up homemade muffins and steaming cups of tea to the museum’s visitors.

We spent whole days in the oasis of The Company’s Gardens, a former vegetable garden maintained by black slaves that has been transformed into a lush expanse of green lawns and botanic gardens. It is flanked by some of Cape Town’s most impressive museums, including the National Gallery, which showcases South African art throughout the centuries, and the Iziko Slave Lodge, built by the Dutch East India Company to incarcerate around 9,000 slaves and those considered mentally ill. We spent hours wandering the exhibits and absorbing the turbulent history of South Africa, before emerging into the tranquility of the lush Company’s Gardens where local families picnicked on the lawns and workers napped during their lunch hour.

On the other side of Cape Town we explored the illustrious Victoria & Albert Waterfront, South Africa’s oldest working harbor which has been revamped into a strip of upmarket restaurants and boutique shops along the edge of the Atlantic. Restaurants with expansive balconies hang on the edge of the water, while tour operators selling caged shark dives nestle at their base. At the far end its famous red 19th century Clock Tower still overlooks the fishing boats that come and go from the port. 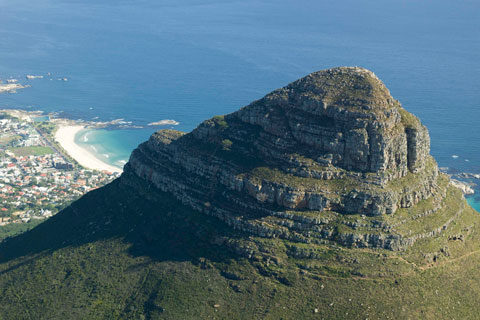 We stumbled upon an indoor food market, housed in an historic “pumphouse” building, where gourmet delicacies from across the world are served up in an eclectic street-market atmosphere. We feasted on paella and homemade brownies, washed down with freshly squeezed orange juice, then wandered out into the adjacent Nobel Square where Desmond Tutu, FW de Klerk, Albert Luthuli and Nelson Mandela stand cast in bronze. These four South African Nobel Peace Prize winners were influential players in the country’s transition from apartheid to democracy and the inscription: ‘Never, never and never again shall it be that this beautiful land will experience the oppression of one by another,’ lay in quote at the feet of Mandela.

South Africa’s dream to become a democratic and free country for all is still a work-in-progress, and the disparity between whites and blacks bubbles over into crime and fear in pockets of the country. Heavy security and barbed wire surrounding almost all of Cape Town’s houses was quite startling for me as someone accustomed to the open front lawns and un-walled houses of Australian suburbia.

Central Cape Town is undoubtedly the heart of the tourist action, but there are growing numbers of places in the surrounding suburbs where local neighborhoods are reinventing themselves, drawing in-the-know visitors to sample a taste of local life. The “Neighbourgoods” Market at the Old Biscuit Mill in Woodstock was one that we stumbled upon. Each Saturday, organic farmers, artisan bakers and gourmet producers descend on this historic mill to showcase their products to a steady stream of Capetonians and tourists alike. The selection of goods was quite overwhelming and I wished I had the opportunity to sample a little of everything. We settled on acai smoothies and thin-crust pizza topped with smoked snoek (a type of mackerel), dining on long, communal tables that encouraged us to talk to those around us and embrace the sense of community.

Venturing south to the Cape of Good Hope 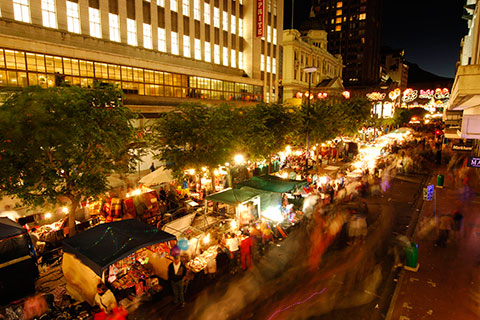 After a week in Cape Town we rented a car to explore its nearby regions, heading south to the wind-swept landscapes of the Cape of Good Hope. Here we watched seals frolicking on remote beaches, hiked along dramatic stretches of coastline, and took in the never-ending views that stretched south towards Antarctica. Part way between this magnificent protected area and Cape Town lies the African Penguin Colony of Boulder’s Beach where suited jackass penguins waddled along its slippery rocks and plunged into the chilly waters.

Boulder’s Beach lies on the edge of historic Simon’s Town, South Africa’s main naval base, and we stopped to soak up the seaside ambiance of this quirky town. Its famous St George’s Street is lined with beautiful Victorian architecture and a statue of “Just Nuisance” — a local Great Dane who became the only dog to ever be enlisted in the Royal Navy. We even heard there was a yearly Great Dane look-a-like parade in his honor! A restaurant serving fresh, local seafood caught our eye and we feasted on oysters, mussels and Cape rock lobster, washed down with the ubiquitous Castle lager.

For our last evening in Cape Town, we took a recommendation to hike up Lion’s Head, a spectacular peak resembling the head of this iconic African predator, situated between Table Mountain and the flat-topped Signal Hill. The sunset views from here over the Atlantic Ocean are legendary and it seemed a fitting way to say goodbye to the “Mother City”. 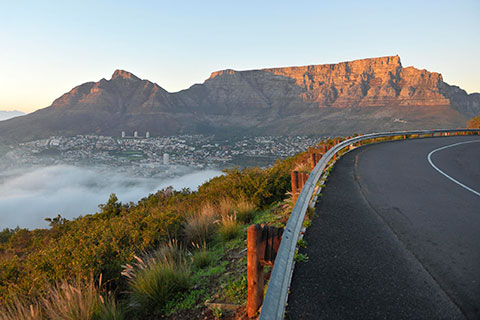 Armed with a bottle of red wine, crackers and dip, we plodded our way up the circling path, before encountering the immense boulders that lie at its peak. Metal ladders and chains have been installed so you can haul yourself over, then rock hop up the steep path to the top. There were moments when we wondered if it was all worth it, but when the 360 degree views opened out across Cape Town, Table Mountain and the Atlantic Ocean, any doubts were blown away. We nestled into a rocky outcrop and popped our bottle, watching as the sun slowly sank towards the turbulent waters of the Atlantic and bathed Cape Town in a rich glow.

Caught up in the madness of football’s biggest competition, the charms of this city had been lost on me during my previous visit. But as we were preparing to depart, I felt inspired by the way Cape Town celebrated and acknowledged its past, looking towards the future both culturally and environmentally aware. It was a city where I felt energized by its natural spaces, and sitting on top of Lion’s Head at the bottom of Africa, taking in Cape Town’s overwhelming beauty, I felt like I could stay forever.

The popular cable car ride to the top of iconic Table Mountain departs from the Lower Cable Station outside of Cape Town. There is limited parking for cars at the base which is also served by MyCiti and City Sightseeing buses from the central city.

Roundtrip fare is about $17 for adults. There is a restaurant/cafe and gift shop at the top.

Hiking is an option. There are several hiking trails at the summit, and guided tours are also offered. For those who wish to scale the mountain, the trailhead is located near the Lower Cable Station and the climb, occasionally steep, takes about three hours.

Weather and visibility at the summit is iffy. Check the cable car website (http://www.tablemountain.net) for current conditions.

Located at 25A Buitenkant Street in Cape Town, the museum is open from 9 a.m. to 4 p.m. Monday through Saturday (Sundays by appointment). Admission is R30 ($2) for self-guided tours.

Tours to Robben Island depart three times daily from the Nelson Mandela Gateway at the V&A Waterfront in Cape Town. The tour takes about four hours including the ferry ride to the island. On the island, visitors board buses and meet their tour guide.

Situated at the foot of Table Mountain, within a stone’s throw from the Cape Town Stadium and in the heart of Cape Town’s working harbour, the V&A Waterfront offers the visitor an abundance of unforgettable experiences. Indoor shopping and entertainment venues seamlessly merge with ocean vistas and mountain views and the fresh sea breeze and warm African sun add zest to a cosmopolitan, vibrant atmosphere. More than 80 restaurants bring a fusion of international food, from rustic al fresco fish and chips to starched table-cloth cuisine.

The market is housed in an old sky-lit brick warehouse and courtyard at the Old Biscuit Mill in the industrial neighbourhood of Woodstock, Cape Town. It is as much a source for farm fresh as well as organic foods and locally produced specialty goods, as it is a meeting point to enjoy community, swap ideas and stories, and become educated about what we buy and eat by going directly to the source. A calendar of seasonal events, specialty festivals, and live music feature throughout the year.

A nomadic lifestyle has taken Pippa Strickland to more than 90 countries around the world. She has lived in remote tribal communities, in the midst of the Amazon jungle, on the surf coast of Morocco and on the wild island of Tasmania. While she has published work in a number of scientific journals, her work as a travel writer and photographer has been published in numerous print and online outlets. To view her portfolio, visit www.pipstrickland.com