Edinburgh is to Scotland like London is to England – more than just a capital, both cities feature enchanting streets draped in history, progressive cultural and artistic movements, and festivals that ignite the city in all the colors of the rainbow.

It was the latter that was my real reason for choosing Edinburgh as my Scottish base, as I lined up a temporary position working for a small theatre company over the chaotic Edinburgh Festival season that spans the month of August. The job itself was nothing glamorous — working front-of-house attending to patrons before and after shows — but it was going to place me in the midst of all the festival action and expose me to artistry I would have never discovered on my own.

The Edinburgh Festival season combines two major events: the Edinburgh International Festival and Edinburgh Fringe as well as a number of smaller cultural events that focus on individual art forms.

The International Festival was established in the post-World War II years in an attempt to reignite the human spirit and provide a platform for art to flourish once again, and it has traditionally featured more mainstream performances in theater, music and opera.

The Edinburgh Fringe evolved from performers “gatecrashing” the main event with events that pushed the boundaries of what was considered acceptable. It is the latter that has since grown into the largest festival in the world. The result of both these events, as well as their smaller counterparts, is a month-long party that celebrates art in all its diverse, weird and wonderful forms, with the captivating city of Edinburgh as its backdrop.

Getting started on the Royal Mile 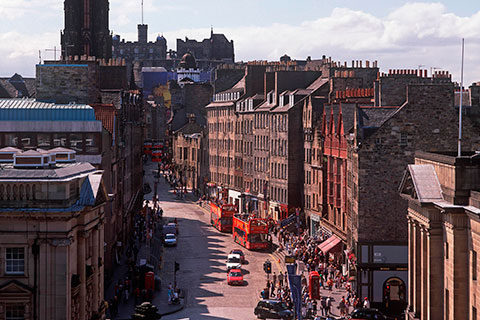 Edinburgh draws large numbers of tourists throughout the year, but the week leading up to the annual festival sees the city completely transform, with the iconic Royal Mile heaving with newly-arrived visitors and performers, keen to promote their shows and trigger ticket sales for the coming month. A walk along this famous stretch of road that descends from the rocky outcrop atop which Edinburgh Castle perches is an ideal way to get your bearings. Lined with cosy pubs and souvenir shops selling plush highland cows and traditional kilts, the Royal Mile literally becomes the city’s stage, as comedians, acrobats and poets vie for attention and “spruik” their abilities.

With more than 3,000 performances at some 300 venues, reading an Edinburgh Festival program of events can be completely overwhelming, and a walk down the Royal Mile provides a taste of each act in the flesh, with plenty of free tickets dispensed for the opening shows to help draw in customers. It was also a dangerous route for me to walk going to and from work each day as the street became completely clogged with people and wild distractions at every turn!

The festival season in Edinburgh bursts onto the scene with a vibrant street carnival that features performers ranging from Eastern European brass bands, to latin samba groups and traditional Chinese dragons. In the lush surrounds of the Princes Street Gardens, I found a spot of grass and watched as this neverending concert played out before me. Little children wobbled their dance moves as performers in fantastical costumes infected the crowd with an intoxicating and cosmopolitan joy for life. The carnival represented what the Edinburgh Festivals were all about: a celebration of art in all its forms, accessible to a wide-ranging audience. 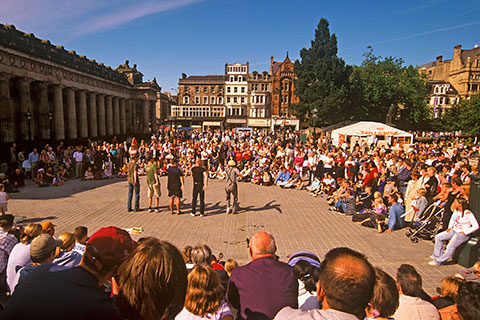 As with most festival-goers, there were particular events I wanted to see, featuring comedians I loved from the television and musicians I had heard on the radio. But thanks to the carnival and Royal Mile performances, a myriad of alternative art forms opened up to me. I attended storytelling sessions that refreshed my childhood love of being read to and I watched old country blues performers on the stages of the city’s famed Grassmarket area.

But perhaps the most eye-opening experiences involved the theatre where I was working. While I had dipped my toes into this art form during my childhood, I had always felt the price of tickets was a luxury I could not afford during my student days and after years on the road traveling my disposable income had not increased significantly. Thanks to my job at the theatre in Edinburgh, I had free access to the shows they presented throughout the festival, all of which were newly written works, yet to be established in the mainstream theatre repertoire.

Watching these plays unfold, my ideas on the world were challenged and confronted and my heartstrings pulled by the power of human expression. I was exposed to some of the most brilliant wit I had ever encountered and felt completely enraptured by the lights, sounds and visions before me.

Discovering the “other” festival events

One of the alternative cultural events I stumbled upon during Festival month was the Edinburgh International Book Festival. As a keen reader who spends my leisure time scouring local libraries, this was an exciting yet unexpected discovery. I attended political discussions and cultural debates with some of the world’s leading authors and listened to poetry being recited with overwhelming passion. I picked up books to read that were left on benches throughout the city, attached with notes requesting once I finished reading it, that I leave it somewhere for the next reader and pass on the literary love.

One of the most famous events to be held during the festival season is the Royal Edinburgh Military Tattoo – a nightly display of military bands from across the world in the elaborate parade grounds of the Edinburgh Castle. Tickets to this event always sell out well in advance, but as my accommodation was across the road, I could sit listening to the drum beats that resonated throughout Edinburgh’s Old Town and watch as fireworks blazed into the sky at the completion of the event each evening. The word “Tattoo” derives from an 18th century call for tavern owners to turn off their keg taps so British soldiers would return to their barracks, and later evolved into a form of evening entertainment performed by military musicians for their colleagues. It is not only a favourite event for international visitors to the festival, but local Scots make up a significant percentage of ticket holders, and as I listened to the sound of bagpipes soaring through the air, I could understand how this instrument captivated the soul and nationalistic pride of the Scots.

Uncovering the best the festivals have to offer 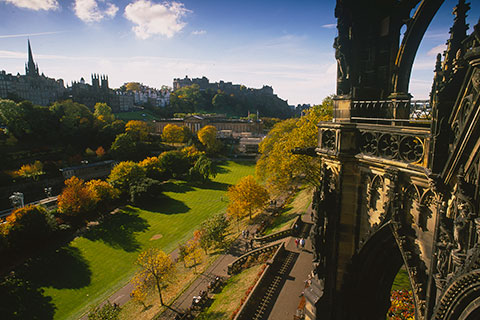 Aside from scheduled and ticketed shows, one of the real pleasures during the festival is frequenting the “free fringe” venues, scattered across the city. Normally located within pubs and hotels, performers of various kinds are invited to present their shows while we, the punters, enjoyed a casual drink and catch-up with friends. These informal environments often involved plenty of crowd participation and you never really knew what you were in for each night – an element that was both exciting and intimidating at the same time!

There were also countless “pop-up” venues – spaces that had been creatively transformed into clubs and stages where the imagination could run wild. Abandoned bookstores, former churches and cowsheds lined with haystacks were some such venues, where the nightly shows were not just about the act, but also the wonderland you had been transported into. There was even the opportunity to sip on your beer under the udder of an immense purple cow! It felt like every corner of Edinburgh was part of the festivities, with each venue given its own, personal stamp.

Word-of-mouth is the most powerful way of finding out what is happening and which shows are “must sees” and which could probably be missed. While there are countless reviews in newspapers and on bulletin boards across the city, it was my own network of friends (along with those newly made at festival venues) that pointed me in the right direction. Many of the periphery Edinburgh Fringe venues offer relatively undiscovered artists a stage, providing a platform for some of the world’s most loved comedians and musicians to launch their careers, so keeping an ear to the ground on the Fringe “Chinese whispers” was all part of the festival experience. 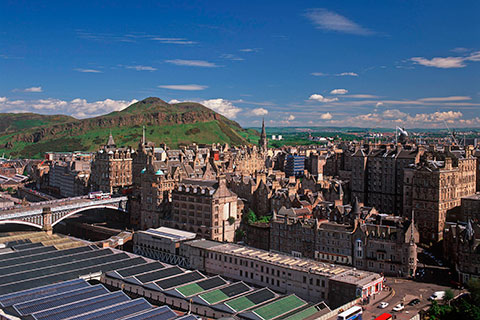 Despite the constant stimulation and vibrancy, the Edinburgh Festivals can be overwhelming, and there are pockets of the city where one can escape if it all gets too much. The Royal Botanic Gardens in the north of the city became one such respite for me, and here, wandering the landscaped expanses, I could find a few moments of peace and reflect on the artistry I was being immersed in. I often walked a section of the Water of Leith Walkway to get there, following this small river from the Dean Gardens, just to the northwest of the Castle, exiting when I reached the Royal Botanic Gardens. It follows the river all the way from Balerno in the west of the city, through to Leith where it flows into the Firth of Forth, and passes through some of the city’s most fascinating historic areas, such as Dean Village. A stroll along here was an ideal way to clear the mind as the Water of Leith rippled alongside.

Another oasis for me was Arthur’s Seat – the city’s dominant peak, which is situated within Holyrood Park, just to the east of the Edinburgh Castle. It is accessed along a steep uphill trek, but at the summit there are spectacular panoramas across the city and the parklands to the southeast. From this silent place, up on high, you can only wonder at the antics taking place in the festival-infused streets below.

A less conventional escape I found (but an equally important Edinburgh landmark) was Greyfriar’s Kirkyard – a captivating old graveyard just a short walk south from where I was staying near the castle. It is set within the grounds of a 17th century Church of Scotland kirk (or church) of the same name, and its old graves and tombs have been the setting for “unusual occurrences” throughout its history. But potential ghost sightings didn’t put me off in the daylight hours, and its park benches were the perfect spot to relax and soak up the mid-summer sunshine.

For the residents of Edinburgh, the annual festival season brings mixed feelings. For some it means business, for others torture as the streets become impassable and just getting around is a challenge. Many take the opportunity to leave the city all together and enjoy their summer holidays somewhere more peaceful.

But for me, the spirit the Festival brought to the city was infectious, and despite the fatigue that set in after consecutive late nights and extended hours spent in the city’s historic pubs, I wished I could spend every August in Edinburgh, celebrating humanity’s ability to create and support the diverse expressions exhibited by artists from across the globe.